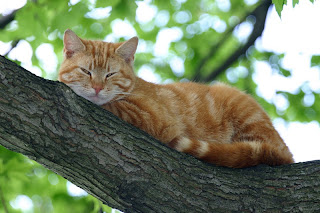 Dwight Nelson recently told a true story about the pastor of his church. He had a kitten that climbed up a tree in his backyard and then was afraid to come down. The pastor coaxed, offered warm milk,  etc.

The kitty would not come down. The tree was not sturdy enough to climb, so the pastor decided that if he tied a rope to his car and pulled it until the tree bent down, he could then reach up and get the kitten.

That's what he did, all the while checking his progress in the car. He then figured if he went just a little bit further, the tree would be bent sufficiently for him to reach the kitten. But as he moved the car a little further forward, the rope broke.

The tree went 'boing!' and the kitten instantly sailed through the air - out of sight.

The pastor felt terrible. He walked all over the neighborhood asking people if they'd seen a little kitten. No. Nobody had seen a stray kitten. So he prayed, 'Lord, I just commit this kitten to your keeping,' and went on about his business.

A few days later he was at the grocery store, and met one of his church members. He happened to look into her shopping cart and was amazed to see cat food. This woman was a cat hater and everyone knew it, so he asked her, 'Why are you buying cat food when you hate cats so much?'

She replied, 'You won't believe this,' and then told him how her little girl had been begging her for a cat, but she kept refusing.
Then a few days before, the child had begged again, so the Mom finally told her little girl, 'Well, if God gives you a cat, I'll
let you keep it.' She told the pastor, 'I watched my child go out in the yard, get on her knees, and ask God for a cat. And really, Pastor, you won't believe this, but I saw it with my own eyes. A kitten suddenly came flying out of the blue sky, with its paws outspread, and landed right in front of her.'

Never underestimate the Power of God and His unique sense of humor.

Anyone can count the seeds in an apple; but only God can
count the apples in a seed

GIVE ME A SENSE OF HUMOR, LORD

GIVE ME THE GRACE TO SEE A JOKE

TO GET SOME HUMOR OUT OF LIFE

AND PASS IT ON TO OTHER FOLKS
AMEN !